The Safe and Secure Life

Human beings seek safety and security in daily living, freedom in thought and action, and integrity and trustworthiness in relationships with their fellow man. These desirable qualities of life seem within reach in our western society and we intuitively expect them because freedom, integrity and trustworthiness characterize reality and are inherent in every individual. Whenever we forget who we are, at a basic level we yield our autonomy to appearances–to what we see, hear and feel–the language arena. We believe we are the image seen in the mirror. When we allow the human condition to inform us who we are and what’s going on, we consent to a division between ourselves and our world of others.

Whatever divides conquers. Safety and security are never issues to oneness. Scientific Metaphysics teaches that the conscious human individual, living himself responsibly, is forever practicing oneness by discerning the spiritual facts of everything confronting him. Appearances, views of reality, are not separate from the allness of Being–the Being being itself being constituting his very own presence. 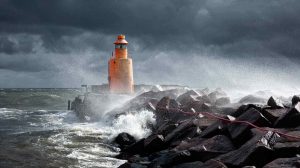 Photo by Tina Rolf on Unsplash

Recalling a book entitled Mr God, This is Anna. I am reminded of the account of a 5 year old little girl asking her friend, “Where are you?” He replied, “I am here.” She then asked, “Where is me?” He answered, “You are there.” She said, “Oh, that isn’t right!” After a moment she asked, “Where do you know that I’m there?” Exactly! Knowing is a function of consciousness. Where do we know anything? We live our world in/as consciousness so we live the world here where we consciously exist, never there as something separate.

Problems and their solutions begin right where we live, our conscious awareness–conscious Being. Nothing exists external to Consciousness. Living oneself consciously aware has you intuitively “doing unto others as you would have them do unto you.” The Golden Rule works because oneness is the inherent constitution of Being. This Rule precedes and embraces your daily living including whatever activities the day unfolds. “The human is human because it is divine, and not human for the same reason.” (Laird)

Without reality present, no appearance world is possible. When we don’t know who we are, we have no way to properly address all those ‘others’ appearing as our world. So we generate the challenge of redeeming any supposed division or separation to its original one. Oneness is the law of Being. One conscious infinitude of Being is observed in the mode of paradox as a full range of opposites–I /not I; good/bad; right/wrong, sick/well, etc. Language looks dual in its mode of consciousness defining allness. To paraphrase Mrs. Eddy, a knowledge of the God-idea is gained by opposite facts and phenomena.

Within the language paradox–the appearance world called the human condition–the issue of security begins with a proper examination of who or what is being threatened and the nature of the threat. All “seeming” appearances are the spiritual facts of Being showing up in/as language appropriate to each individual’s self-view. Each of us lives the world as he is!

Is my life in danger? Is my world in danger? Do I fear failure, rejection, loss, poverty? Another of Mrs. Eddy’s statements is helpful: “Would existence without personal friends be to you a blank? Then the time will come when you will be solitary, left without sympathy;” Substitute any concept based belief for ‘personal friends’ to open a place to begin resolving a problem. It points out any attachments to concepts you may be allowing to limit you. For example: Would existence without money, or a job, or a relationship, or (you name it) be to you a blank?

Whatever limitation you fear, will present itself as a simulation of reality or “belief-system” in your human experience. Freedom occurs when what you fear is seen to be a belief without substance or reality. When seen as merely a belief, the fear dissolves for lack of a believer. As you confront beliefs with facts you demonstrate the temporal nature of “language.” Concepts cannot bring satisfaction or fulfillment since appearances are incapable of generating experience, but they do serve as a barometer of your self-sense.

In your individual world experience, the appearance of peace accords, treaties, airport security systems, radar surveillance or any other of the marvelous technological advancements currently available in our universe, are the tangible appearance of an already accomplished safety and security existing fully expressed in/as Spirit, the God-idea, seen the only way you can see it each moment.. Acknowledgement of present reality seen in the language of our discernment, has the language fulfill on itself as Love meeting the human need. However reliance on that language view, as if it existed separate from reality, renders language neither satisfying nor fulfilling.

Mrs. Eddy assures us “But this seeming vacuum is already filled with divine Love.” “Love will force you to accept what best promotes your growth.” So when the way seems chaotic, threatening or unsafe it is a ‘red-flag,’ your own Love requiring you to check the basis you are accepting for your safety and security.

Human attempts to assure safety and security that are based on the language arena of appearances including hurricanes, human bombs, wars, terrorism attacks and the like, have been effective to some extent for limited periods of time. But there is always a price exacted for believing a lie. Lasting inner peace and well-being, the satisfaction of living oneself whole, well, safe and secure is not available within that framework of precautionary measures believed to be separate from your Mind, no matter how costly or how brilliantly conceived. The fact is that Being is One. Nothing exists external to Consciousness. Human efforting, done for its own sake, is useless in obtaining individual and universal safety and security.

So, what is the answer? Every individual must tell the Truth regarding who he is and what is happening. Science teaches us that we are mental beings right now! Every single individual lives and moves and has being in/as Mind. Now is the conscious human being the full expression of Mind, a mode of the one Consciousness. We fail to live this Science when we allow ourselves to be informed by the picture presented as a concept. Language (the concept) is a point of view, not a concrete fact of existence. So I leave the language alone and hold thought to the facts of Being. This focus has the individual cease to be a struggling limited simulation of himself and live his divinity authoritatively, thus experiencing language that is pleasing, satisfying and fulfilling. Living himself unselfconsciously, the individual bes, does and has what others be, do and have within the concept arena, and then wonders why everything happens to him. “It isn’t fair,” is his frequent complaint.

Living yourself consciously aware, your language world offers no problem, even when appearances say it looks like a problem. The Scientist has no problem because he understands that the language appearance is simply a view–his view–of divine reality the way he sees it. So his focus is on seeing accurately, not on fixing the view. The personal and world view entertained by each one reflects back to him his own highest sense of divine reality. “Hold thought steadfastly to the enduring, the good, and the true, and you will bring these into your experience proportionately to their occupancy of your thoughts.” (Eddy)

Mrs. Laird, in her book We Are The World We Walk Through, states, “Safety and security are spiritual facts identified on every belief level.” She also says of the man image “intuitions of Reality, of his own innate Good, are the only safeguard in the precarious venture of living.”

Scientific metaphysics introduces the Reality dimension disclosing the oneness and allness of Mind/Love/Spirit. This Reality dimension generates and sustains all that exists and all that seems to exist from the least organic speck to the entire physical universe including outer space. Consideration of the spiritual facts of Being calls into question the nature of who or what threatens and who or what is being threatened. Any simulation of reality or “belief system” thought to exist separate from Mind (its generative source) manifests itself in the form of threat, instability and irresponsibility. Within your framework of beliefs or simulations of reality, what you see will always be negative and unrewarding if depended upon for information.. It was a wise man who said, “You can’t trust anyone!” On the level of language this is true.

The relationship existing as the God-idea and its reflective expression, man, is the human/divine coincidence. One cannot exist without the other. Every individual will sooner or later awaken to this fact of his own oneness with/as universal source.. There cannot be the God-idea without man, nor can there be man without source, the God-idea. Being cannot exist without that which gives it identity, language. Language has no existence without its generative Principle termed Being or the God-idea. Being, being itself being is all there is. This infinite action is eternal, immortal, impersonal and perfect. There is never a moment when it is not whole, complete, satisfied and fully self-expressed. All phenomena (all language) appears, disappears and reappears on-goingly. It lives in its dying and dies in its living It is constantly living as Being and dying as language. The smallest shift in seeing or perception has an entirely new world evolve.

To restate: Each conscious individual (Mind present), lives in a world of his own making. When my world is lived as if it existed “out there” separate from my Mind, my experience will expand in the negative. Seen as the manifestation or evidence of Oneness, I live my own divine/human coincidence in the language of peace and joy and power.

Insightful living has no victim. One generative Principle/Love/Spirit being itself manifests as the world we walk through. The individual who lives himself consciously aware of who he is (Being/Mind/God-idea) experiences his world (his simulations of reality) as peace and joy and power. The individual who lives himself unconscious of who he is (blinded by his view and his beliefs regarding that view) experiences simulations of reality–his daily experience–looking like violence, chaos and crime.

Ultimately each individual discovers that threats, unsafe situations, and security, like anything else in his experience, are of his own making either consciously or unconsciously. Human living is a laboratory of Self-discovering wherein every moment lived self-responsibly accesses the omnipotence of infinite Mind and reveals my humanity living purposefully, effortlessly and with dominion.

Vision, focused as the identification of Soul present, sees the real and permanent showing up in language that is pleasing. Buying into the belief that any language form or concept is actual and real, in place of a view of reality, has my human experience expand in the negative.

To paraphrase Mrs. Eddy: “Perfect and infinite Mind (my reflective existence) enthroned (acknowledged as source) is heaven.(harmony, the reign of Spirit; government by divine Principle–the atmosphere of Soul).

Log into smile.amazon.com with your Amazon account and select Institute of Metaphysical Science as your designated charity. Then shop on smile.amazon.com as you normally would on Amazon.com. A portion of your purchases will support the IMS mission.

Get the latest IMS news, learn about upcoming events and more. Become a subscriber today!